Earlier this year, we released Shaka Rising: A Legend of the Warrior Prince by author/illustrator Luke W. Molver in North America, and this month we’re celebrating the book’s release in South Africa at Comic Con Africa on September 14-16. This graphic novel was the first release in our African Graphic Novel Series and the first release under the Story Press Africa imprint, a collaboration between Jive Media Africa in South Africa and Catalyst Press in the United States.

The book was praised by The Wall Street Journal, Kirkus, Booklist, and the Midwest Book Review. This nuanced look at the life of the legendary Zulu king is part family saga, part military epic, and part history lesson. It has been a pleasure to bring Shaka’s story to readers. If you’re heading to Comic Con, be sure to stop by Stand AA43 to say hi to us, and to Stand AA07 to see Luke and more of his work!

We chatted with Luke about his work, writing Shaka, and what’s next for him. Keep up with Luke at his website, on Instagram, and on Facebook. 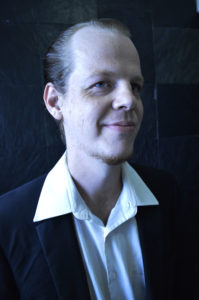 How did you come to illustration?

I grew up in a household of readers and reading, so a love of stories and storytelling was cultivated in me from a very early age. As a child, my mum and grandmother read me bedtime stories of the Brothers Grimm, the Greek legends and Norse myths; and my father’s expansive collection of pulp sci-fi fed my thirsty imagination into my teens.

My love for fantastical stories grew alongside my other passion, which I practised since I could hold a pencil – I’ve been a budding artist my whole life, scrawling hyper-detailed monsters and mutants from childhood (which drew some initial concern from my kindergarten teachers).

These passions came into sharp focus when I discovered comic books – and realized this was the medium I’d use to tell stories of my own.

How would you describe your style?

Artistically, I have few styles I utilize for various projects. A lot of my comic book work is self-published, so from a purely financial perspective it is cheaper for me to print my comics in black and white. This does, however, suit the tone of a lot of my stories, which are often set in the gritty genres of crime-noir or cyberpunk science fiction.  With Story Press Africa publishing the Shaka series, I have an opportunity to work in full colour, which has given me a whole different artistic freedom. And of course, the story of Shaka, set in the sumptuous scenery of southern Africa, really deserves to be absorbed in majestic colour!

From a writing point of view, my technique of storytelling is initially driven by the characters. Once those characters are imbued with motivations and desires, and their relationships with each are developed, I find the story begins to tell itself.  The events of Shaka Rising are, of course, based in actual history so as a writer the challenge becomes exploring the characters involved in that history. While Shaka is the protagonist of the story, I have endeavoured to give the rest of the characters an equally well-developed humanity and empathy. 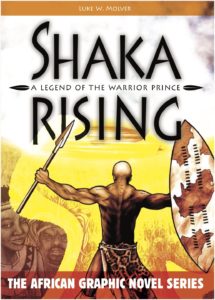 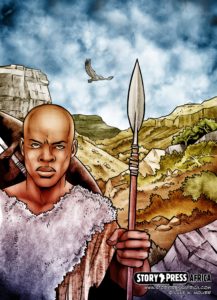 What drew you to Shaka’s story?

I would say that Shaka’s story is unique in that the he is as much myth as man— his legacy blurs with his legend. Oral records and biased diary accounts make for sometimes unreliable source material… but this also makes for spectacular narrative possibilities. With Shaka Rising, I have attempted to strike a balance between these elements, the facts and the folklore, and pay respect to both.

Are there any particular challenges to writing for a younger audience as opposed to your work for adult readers?

Honestly, for me it’s as simple as writing comics that I myself would enjoy reading. Obviously, one should moderate gratuitous violence and other graphic adult content, but thematically and narratively speaking, I believe a good story is a good story — it should be engaging to young and old alike. I make every effort not to ‘write down’ to readers, even younger audiences. If there is a particular word or phrase that is unfamiliar… never has it been easier to find out for oneself what it means – hello, Google. This also helps keeping readers focused and invested in the story, encouraging them, particularly younger readers, to do a bit of further research themselves on the parts of the story that interest them most.

The educational matter contained at the end of Shaka Rising is a great help in this regard, bringing to light the nuanced customs and culture of a people that are unfamiliar to many outside of Africa. 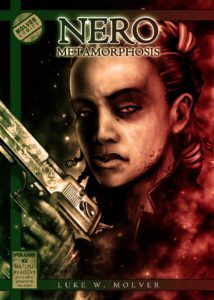 What’s the comic book scene in South Africa like?

While calling it an ‘industry’ may be somewhat inaccurate, the comic book ‘scene’ in South Africa has been around in various forms for quite some time, albeit in an extremely underground capacity.

During the Apartheid years in South Africa, political cartooning was (and still is) a powerful force in newspapers and counter-cultural zines. In more recent years the comic book scene has expanded beyond political and editorial cartoons into longer-form narratives and stories.

Unfortunately industry infrastructure and support is still largely lacking, and while there is a tremendous amount of writing and artistic talent in South Africa, a lot of comic book creators work similarly to me – self-publishing their work as labours of love. Encouragingly, over the last few years there has been renewed interest in comic books and ‘geek culture’ worldwide, and South Africa is growing a few of its own annual pop-culture festivals. Most of these are centred around computer/tabletop gaming, but nonetheless they are events that increasingly welcome local comic creators.

FanCon is a local convention that takes place in Cape Town in the first quarter of the year, and in my opinion this is currently South Africa’s best pop-culture festival, catering specifically to comic books and local creators. This kind of support is exactly what our still fledgling industry requires, and I hope to see these conventions grow and multiply in coming years. And of course, coming up we have the first Comic Con Africa in Johannesburg, which I think is going to be a great boost to local pop-culture and hopefully show the world some of the amazing comic book talent this country has to offer.

Who are some artists you admire?

A lot of my earliest artistic inspirations came from one specific comic book, a British sci-fi anthology called 2000AD, begun in 1977 and still going strong today. Showcasing an enormous diversity of both art and writing, 2000AD was an antidote to hackneyed superhero fodder being churned out by the big American publishing houses. When I was a kid, I found a lot of DC and Marvel stuff boring and repetitive, both in its art and writing. And to be frank, I think I still do.  (Except Batman. He was always cool.)

Specifically, I drew a lot of my early artistic inspiration from the muscular, painterly colouring of Simon Bisley, the intricate linework of Brian Bolland, the starkly distinctive black and white style of Frank Miller, the expansive flat colour and meticulous ink stippling of Moebius, and the subtlety of form and pose captured by Frank Frazetta.

In addition, there are dozens of other artists working in comics today, both international and local, that continue to inspire my work and my styles.

Image from the forthcoming Shaka Reigns

How’s work on the next installment going? What can readers expect from the continuation of Shaka’s story?

The next installment, titled Shaka Reigns is hot in production right now! It picks up the story a few years after the events of Shaka Rising, as the Zulu king faces new challenges from white settlers, and treachery from within his own kingdom…

Shaka Reigns will be released next year, and if I may say, I think readers are in for a treat! I am very proud of Shaka Rising, and the second volume is going to up the excitement for the audience and the kingdom of Shaka.

What do you hope readers take away from Shaka’s story?

With Shaka Rising, I have tried to strike a balance between action-packed and educational. Readers get an exciting, fast-paced adventure story in the vein of something like Game of Thrones, while learning about real-life cultures and peoples that they may be unfamiliar with.

However, it is worth remembering that although extensive research was conducted, this is only one re-telling of Shaka’s story, of this part of South African history. There are lessons to learn not only from the past, but how we record it, and how we recall it. The saga of Shaka is a marvellous opportunity to explore these ideas, and I hope that the comic book also gives readers a more critical insight into how history is written, and the inherent biases within it.

Shaka Rising is an epic tale set in a different age, but the characters are as familiar to us as sibling rivalry is, or the heartache of a lost love, or simply a yearning to belong. It is as much a coming-of-age tale as it is a saga of war and politics. This is why I believe everyone can enjoy, and even relate to, our story of Shaka.

What’s next for you? 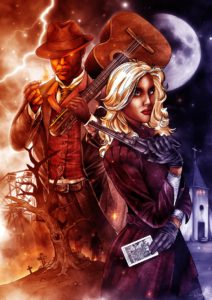 From Sunday’s Slave by Luke Molver

Well, I’m always working on a couple of comics at any time, I’ve never understood the notion of writers’ block – I have too many ideas, and not enough minutes in the day to produce them all!

Shaka has been occupying most of my headspace this last year, but I’m also continuing to write and illustrate a few of my other self-published titles, including Sunday’s Slave, my voodoo horror comic based loosely on the story of Robert Johnson, the bluesman who made a deal with the Devil at a midnight crossroads, and Nero, my cyberpunk crime series set in the sun-bleached cities of a futuristic South Africa.

I would also love to continue working with Story Press Africa in producing more of the African Graphic Novel series. There are so many rich, thought-provoking and exciting stories this continent and its history have to offer, and I hope to continue being a part of bringing them to the world.