Who Can Beat a Superhero? Reflections from Comic Con Africa 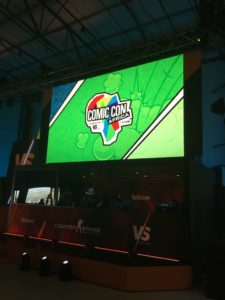 We had an amazing time at Comic Con Africa! it was a pleasure to meet so many dedicated fans, fantastic publishers, and talented artists and to bring Shaka Rising to South African audiences (and now, it’s official; Shaka Rising is available through North America and South Africa, Namibia, and Botswana!). Be sure to check us out on Instagram to see some of the action from Comic Con. We’re sharing some of our thoughts from the event, and what we took away from it. Read on for reflections from Hilary Kromberg and Robert Inglis. And for a really great visual wrap-up of the event, be sure to check out this one-minute documentary from the talented folks at DocuMinute (which features some artwork from Shaka Rising!)

“Does Shaka turn into a super hero in this comic?” a young woman asked me as she thumbed the glossy Shaka Rising graphic novel being launched at Comic Con Africa on the weekend. “Not exactly, but he was super strategic” I replied. She walked on… 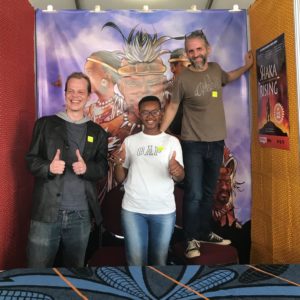 Set up for ComicCon almost complete!

As I watched the approximately 40 000 colourful people over the three days pour in, many dressed in awesome costumes— Superman or Spiderman, Batman or Wonder Women, or even our new hero, Black Panther—a philosophical question was creeping into my consciousness. It came to me on the third day; perhaps we all want to be saved by a big strong superhero, and very importantly, we all want a happy ending. I know I do.

There is much tragedy in our worlds, and we want to immerse ourselves in a fantasy where it all comes together in the end. Just for a moment, the super heroes of Marvel or DC rescue us from darkness and peril. But real life history from colonial Africa, even fictionalized historical stories such as Shaka Rising, don’t easily offer up that neat narrative of redemption and relief. They are often a tragedy with bleakness or death at the end…

The reality is that we don’t have superheroes in real life. We are simply human. While King Shaka has, over time, been held up as either super human or super villain (depending on the particular politics of the narrator) the reality is that he, like us, represents the complexity of the human condition. And Shaka Rising, the first book in the African Graphic Novel Series, tries to convey this. As the Kirkus review said, “this graphic novel admirably allows its hero to retain flaws and scars that keep him squarely in the realm of the human.” The reality of our real-life heroes is not so black and white, but full of colour, as in the pages of Shaka Rising.

Comic Con Africa, too, held that brilliantly colourful array of humanity in its halls. We loved being there amongst the super heroes and villains, old and new. And we at Story Press Africa shall press on in finding our place in this wonderful world of storytelling…

It was an amazing experience to see the awesome creativity and talent on display in the Artists’ Alley at Comic Con Africa. While events like Comic Con are largely built on the huge demand and interest of the blockbuster superheroes, it was refreshing and reassuring to see that creativity is alive and well on a local scale, too. We saw amazing local art and ideas — a real feast for the senses. We also saw amazing opportunities to grow and support the comics sector in Africa and look forward to doing that through SPA.

It seems that everyone realises that there is far more to be gained from collaborating with one another, than from competing. A quick look through a few Instagram feeds will show how supportive the artists are about one another’s work. One of the highlights for me was watching Loyiso Mkize, who has really made as an international artist, spend easily 30 minutes coaching and mentoring a young artist who arrived with his flip-file of drawings, desperate for someone to recognise his talent. Loyiso did, and selflessly showed him the finer points of getting an authentic sense of movement into his characters. There, amidst all the commercial competition in the gaming zones, what really stuck out for me was the camaraderie of the artists and the collaborative nature of their interactions.