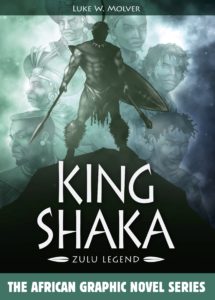 Last month, we and our Story Press Africa partners at Catalyst Press held a giveaway to celebrate the release of the latest installment in our African Graphic Novel Series— King Shaka: Zulu Legend by Luke Molver. The entry was pretty simple: like our giveaway post, and then comment with the name of a historic person or event you’d like to see in a future graphic novel. And people really delivered! There were a host of names, and a timeline’s worth of notable events. It was truly amazing.

Readers are excited about African histories and stories. They want to put faces to names, they want to see history live again on the page. Whether it is the stories of your own country and your own ancestors, or that of those who live worlds apart, there is something special and vital about keeping those stories, those names, in our memories. While we won’t list every name and event giveaway entrants suggested, we thought we’d share just a few to show just how many stories there are to tell…

Mbuya Nehanda, known as a svikiro or spirit medium, she helped lead an uprising by Zimbabweans against the British South Africa Company in Matabeleland in 1889.

Ruth First, a South African scholar and anti-apartheid activist, murdered by the South African government when she lived in exile in Mozambique.

Fatima bint Muhammad Al-Fihriya Al-Qurashiy, who was born in what is now Tunisia, and is credited with founding the world’s first degree-granting institution—the University of al-Qarawiyyin—in 859.

Samory Toure, the leader and founder of the Wassoulou Empire and a resistance fighter against French colonial rule during the Mandingo Wars.

Queen Hatshepsut, the longest-reigning female pharaoh. Evidence of her reign was nearly erased from the historical record after her death until its rediscovery in the mid-nineteenth century.

We could go on, but the lesson here is that these are stories that are worthy of being told. There are tales of bravery, of sacrifice, and of triumph. One of the reasons we’ve chosen to tell stories like these in our African Graphic Novel Series is because many of them aren’t widely-known, or they’re told through a lens that removes them of nuance. We’ve aimed to make our African Graphic Novel Series one that tells these stories through a distinctly African lens, and we’re proud of the results in our first two books, Shaka Rising and King Shaka. There are a never-ending well of fascinating people and events whose stories we’re hoping to share with you in the coming years.

Many, many thanks to all who entered our giveaway, and we hope our winners are enjoying their books! Speaking of the winners, here they are!